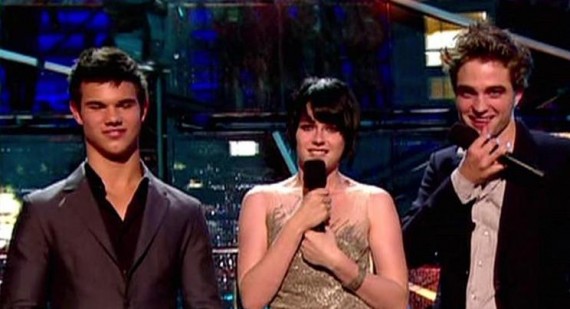 Robert Pattinson’s recent playful comments about how Taylor Lautner did not have much to do in ‘Twilight: Breaking Dawn’ has caused uproar amongst Team Jacob followers. In an interview with Entertainment Weekly Pattinson joked "Having to spend much time with people... it's just nice when you like them. There is a real bond. I think also there's something humbling about wearing the makeup and contacts, except Taylor, he doesn't have to do a thing. He's managed [to do] no work on this last one. He's always a wolf!"

This sparked a massive over reaction from Lautner’s loyal fans who mistook Roberts witty banter as an actual dig at the Werewolf playing hunk. One fan fumed “never diss sum1 1 fitter and stronger than u X taylor<3” while another upset fan said “excuse me taylor lautner probably did more work then you shiny boy”. Pattinsons jesting also rubbed up this fan the wrong way, “tbh, i think taylor has lots to do! he is under a lot of stress and i support him 100%” she said.
Pattinson did take a more serious tone to admit that he did not envy the task put before Lautner in ‘Breaking Dawn’, "He has to fall in love with a baby. Oh God, I can't wait to see how that goes" said the heartthrob. But even showing appreciation for his co stars acting ability did not stop the Team Jacob supporters turning on Robert, “Because RPatz is the best actor in the world! Not!!!!!”stormed the upset fan. Two things are for certain, Robert Pattinson has lost himself some fans and Taylor Lautner lovers seriously cannot take a joke.
200 Fan Uploads: Robert Pattinson and Laut Gallery