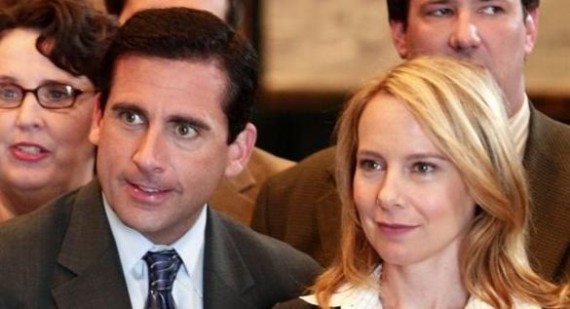 Amy Ryan, star of the US version of hit TV series ‘The Office, has told how Steve Carell wanted to “milk” his final scenes on the show. Carell has finished his run as office boss Michael Scott and Amy said "Steve directed the last episode I was in and we did something that we had in two takes, but he kept doing it. 'Let's go again, let's go again!'" Ryan went on to tell how Carell’s final day was an emotional one "I do know just from texting with some of the cast and the crew that that last day was quite a tear-fest! They've spent eight years with each other and genuinely get along so I'm sure they'll miss him” she said.

She also revealed that her favourite scene from the series with Steve was the one where her character Holly Flax and Carell’s Michael Scott rap together. Talking of the scene she said "It's only like a 30-second clip of us rapping but there's probably 10 minutes of stuff somewhere," she said. "We were just going for broke, it was such a fun job. We would laugh so hard." Amy also stated the she has a very similar personality to Holly "I definitely have that side, not as extreme as Holly but I have that. I can really laugh at myself and make a fool out of myself” said the actress.
Since the departure of Carell’s character the office has been taken over by new boss Deangelo Vickers who is played by ‘Anchorman’ star Will Ferrell. As well as Ferrell a host of other stars are set to appear in the season finale on NBC including Will Arnett, Catherine Tate, James Spader and Jim Carrey. They will all be playing characters fighting to replace Vickers as the boss. This season will continue on Thursdays on NBC.
200 Fan Uploads: Milk and Gallery